This information is provided by the members of the Oregon State Flying Club to pilots who are planning to fly into Corvallis and would like some “inside” information about KCVO and its facilities. It is not a substitute for official charts and publications (like the A/FD) and its accuracy is not guaranteed.

Corvallis Municipal Airport (KCVO) is located in the Willamette Valley about 2 nm south of Corvallis, 23 nm north of Eugene (KEUG), and 72 nm south of Portland (KPDX). Corvallis is a city of about 55,000 people and home of Oregon State University. KCVO is located on the boundary between the Seattle and Klamath Falls sectionals. It appears on both charts and also on the L-1 IFR enroute low altitude chart. The CVO VOR is located on the field and it provides navigational guidance for four Victor airways. The airport is in uncontrolled airspace (class G) but has a Class E overlay whose floor is 700 AGL. KCVO is a busy place, particularly for a non-towered field, and sees more than 50,000 flight operations a year.

Formerly a WWII military training base, KCVO is blessed with two excellent runways and seven instrument approaches from the north, south, and east. At one time there was a third runway oriented NE-SW but that is now closed and used as an emergency vehicle driver training area. If you see cars with flashing lights zooming around that part of the airport they are not chasing you—they are just learning how to chase you should you need chasing. KCVO is a non-towered field, relatively free from obstructions and mostly surrounded by farmland, so if the fan quits there are many good sites for an off-field landing. If departing runway 17, there is a small private field about a mile off of, and slightly to the right of, the departure end of the runway that might look awfully good should you have a take-off emergency. 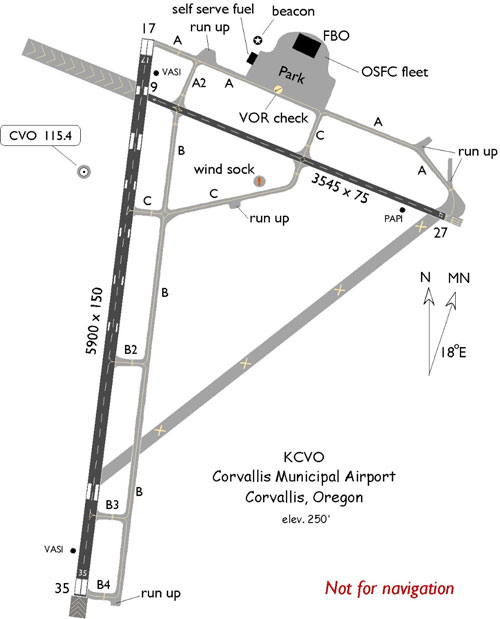 The taxiways, indicated on the diagram, are well marked and straightforward. The only caveat is that Bravo and Charlie both cross runway 9-27 so look both ways and announce on the CTAF before crossing the runway.

There is one FBO on the field. Corvallis Aero Service (541-753-4466) provides instruction in fixed wing and helicopters, fuel (either self service or fuel truck), maintenance of all kinds (including avionics), courtesy car, and Hertz rentals. They are also the unicom operator (123.0). They have a pilot lounge, a computer for flight planning use, and pilot supplies. Transient parking is on the large concrete pad in front of the FBO and there is no overnight charge.

The traffic patterns for all runways are standard, left-hand patterns with entries of 45 degrees and an altitude of 1046 MSL (800 AGL). Since CVO VOR is located on the field, it can be used to help set up for a 45 degree pattern entry for all runways.

VFR: There is nothing tricky about arriving at KCVO in VMC. Simply listen to the AWOS, announce on the CTAF when 10 miles or so out, turn on your landing lights, and enter the appropriate left-hand pattern on a 45. Announce on the 45, downwind, base, and final.

IFR: IFR arrivals are handled by Cascade Approach (119.6) during the daytime and Seattle Center (125.8) at night. There are seven IFR approaches into KCVO: ILS , NDB, GPS, and VOR/DME to runway 17; GPS and VOR/DME to runway 35; and a VOR-A approach that lines up reasonably well with runway 27 provided you can get down fast enough (the circling MDA is 1400’). Cascade Approach is typically very accommodating and will usually vector you to final so you don’t have to fly the full procedures. There are no STARS into KCVO.

VFR: For all runways depart either straight out or make a 45 deg. left turn when able. There are no noise abatement procedures at KCVO but you should maintain a minimum of 1500 MSL when flying over the city of Corvallis, just north of the airport.

IFR: Cascade Departure can be reached from the ground at KCVO on 127.5 during the daytime so get your clearance directly from them. You will most likely be given a void time so be ready to depart before requesting your clearance. They will ask you to report airborne on 119.6. At night, you’ll have to call FSS for a clearance or contact Seattle Center (125.8) once airborne. There are two SIDS for KCVO and an obstacle departure procedure, all easy to fly with a piston single, i.e., no high climb rates and reasonable altitudes. The most commonly used is SHEDD1.SHEDD, which takes you to SHEDD intersection, 8.9 nm E on V23. Usually Cascade Departure will offer vectors to V23 before you reach SHEDD, saving a few miles.

Things To Watch For

There are often large birds in the vicinity of KCVO, particularly hawks, eagles, and, in the fall and spring, lots of geese. If you think someone is shooting at you, it’s probably just the air canon that is sometimes used to scare geese off of the runways.

There is a lot of training that goes on at KCVO in both fixed wing and helicopters. Everyone is usually pretty good about announcing their whereabouts and intentions, but regardless of the wind direction there may be people practicing X-wind landings, IFR approaches, and emergency procedures on any runway, so keep a sharp eye, listen carefully, and don’t assume everyone will be flying the same pattern as you are. Remember, too, that many VFR pilots and students aren’t completely familiar with IFR approaches so if you are arriving IFR in VMC be sure to clearly announce distance, direction, altitude, and intentions as well as the approach you are on.

Helicopter Transport Services (HTC), a fire-fighting company, has a lot of huge helicopters, painted maroon and white, based at KCVO. These machines have fierce rotor turbulence so stay well away from them. Sometimes they practice picking up water out of the pond near the approach end of runway 27. They are usually very good about announcing where they are and what they are doing but beware of taxing too close to one of these beasts when the rotors are turning.

Because KCVO is surrounded by farmland, there are sometimes crop dusters operating in the vicinity of the field. These bright yellow dudes usually announce their intentions and working area but keep an eye out because they sometimes operate just off the end of a runway.

Winter often brings low freezing levels, fronts with rain, and ground fog. Summer is usually clear but often the marine layer will produce a morning layer of clouds with bases 2500-3000 AGL and tops about 5000 AGL. This results in the situation that one can fly VFR all around the Willamette Valley but can’t get out to the east, west, or south because of the mountains. If you are IFR rated, it’s no trick to get a clearance from Cascade Approach, pop up through the marine layer and be on your way in the sunshine. If you are a VFR pilot, just wait until the marine layer breaks up, usually by noon or shortly thereafter.

The football stadium for Oregon State University is only 3.9 nm from the departure end of runway 35 and right in line with the runway. On football days there is an automatic TFR beginning one hour before and ending one hour after the game and extending for a radius of 3 nm around the stadium and up to 3000 AGL, so if you are departing runway 35 you have less than 1 nm to make a left turn to avoid the TFR. There is a safety exception to the stadium TFR rule that allows takeoffs and landings for aircraft “authorized by ATC”. Thus in IMC it is possible to fly an IFR approach to runway 17 over the stadium during a game as long as you are cleared by ATC to do so. In other words, you don’t have to stay up in the clouds until the OSU Beavers defeat their opponent.