The History of the Oregon State Flying Club

Flying at Oregon State dates back to before WWII. For some time in the 1930's there was an Oregon State Glider Club operating at the so called Racetrack Airport south of town.

A student at Oregon State College (OSC) by the name of Bruce Mercer, later writes in an artile, Learning to fly at OSC in 1939 (pdf), "there was not a flying club at the time." In 1941 a Civilian Pilots Training (CPT) program was instituted at the Albany airport and 40 OSC students were trained. Ben Ruffner, a Professor of Engineering, is named as the Director of Flight Training.

The oldest published record of an OSC Flying Club is shown below, a picture of the club members in the 1942 issue of the Beaver, the yearbook of Associated Student Organizations. 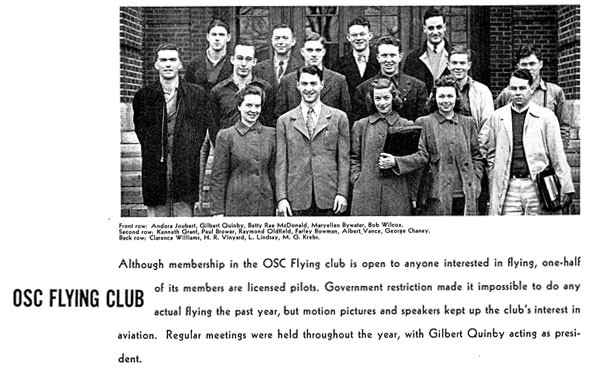 In 1946 OSC had a flight training program supported by the GI bill, and as many as 300 OSC students learned to fly in Piper Cubs and Aeronca Champions. One of those was W.L. "Andy" Andersen, who wrote later (pdf) that, "the head of the Engineering School Department of Aeronautics held several meetings to organize the OSC Flying Club. I attended the meetings, but did not join." Andy eventually became an OSU Flying Club member from 1978 to 1992.

The club in its present form was started in the fall of 1952, and has operated continuously since. The picture below was published in the 1954 issue of the Beaver. 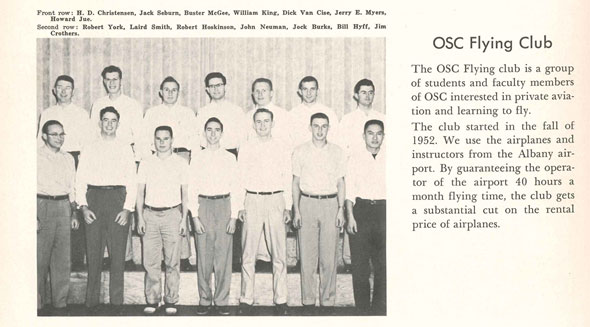 In 1956 the club was incorporated with the State of Oregon under the same name it carries today: Oregon State Flying Club

The club must have purchased its first owned airplane, a 1946 Aeronca Chief, soon after that. The Oregon State Daily Barometer covers the purchase of a second plane, a 1946 Ercoupe, on November 12, 1958. The club president, Dan Chauvet, is named in the article. After a lifelong career in flying Dan is now retired in Watsonville, CA, and shared with us some of his stories from back then (pdf).

This year the Beaver shows the club as the proud owner of a 1 year old airplane, a Piper Colt 1961 model, N5223Z. The airplane is still registered in Canby, OR. The current owner contacted the club in 1997 as he realized its history with the club and flew it to Corvallis for an open house event. 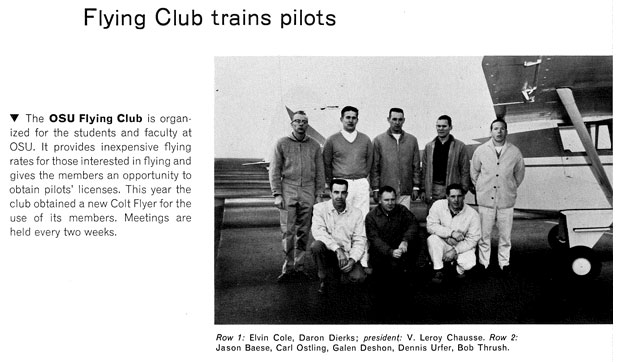 In 1967 William "Bill" J. Fredericks became the faculty advisor for the club and stayed in this role until 1984. He led the Club – with a strong hand – through turbulent times. 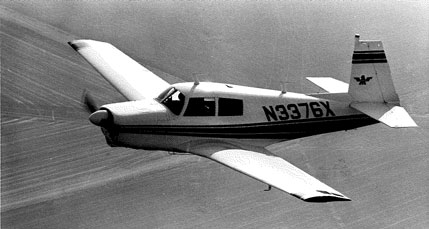 By the beginning of the 1980's membership and flight hours declined and over time adjustments were made to the fleet. 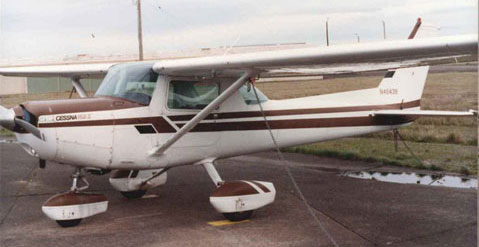 In April of 1984 Faculty Advisor Bill Fredericks retired from the club. By 1985 Bob Baker took his place and stayed with the club until 2001. His tenure marks a relatively stable period. As Cessna didn't make single engine airplanes anymore the club focused on keeping the fleet maintained. Many club flying activities are noted in newsletters. 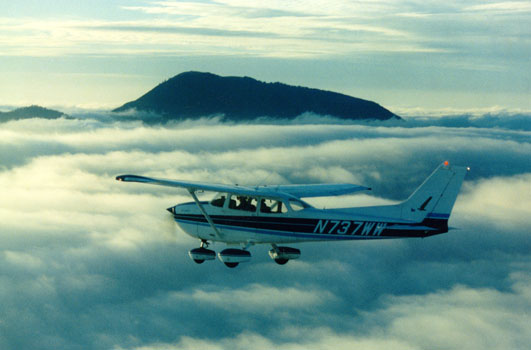 This picture of N737WW ultimately inspired the current club logo with the outline of Mary's Peak. The plane was sold in 1996 and replaced by N75704. A year later the last Mooney was sold and replaced with a Cessna 172RG, N16ED. In the late 1990's club membership and flight hours increased again, and soon it was time to think about adding one more airplane. N73146, a 1976 C172M, was purchased in the summer of 2002. 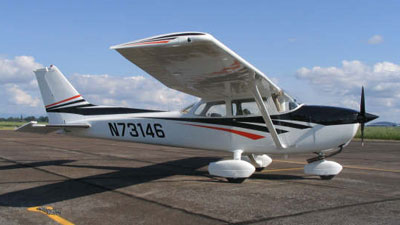 This picture, proudly showing the OSU colors, was taken in 2006 after a complete restoration of paint and interior. The original color was avocado and yellow, which after so many years made the plane look like an ugly duck.

In 2003 the club was registered again with the State of Oregon with restated Articles of Incorporation. While not changing the original mission from 1956 the Oregon State Flying Club, Inc. is since then legally separated from the Associated Student Body it once was. But the members of the Student Flying Club at Oregon State University are also members of OSFC, Inc.

During the years following and continuing to the end of the decade, flying activity again decreased, and the fleet was adjusted once more. The C172RG was essentially replaced with a 2005 C172SP with a Garmin 1000 "glass cockpit", which makes the airplane a "Technically Advanced Aircraft" and marks the club's entry into the 21st century.

By 2011 the fleet was consolidated to three airplanes and an order was placed for a factory new C162 "Skycatcher", a much improved model in a long series of two seat training airplanes made by Cessna. 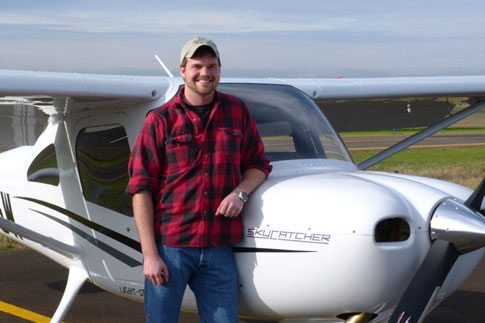 Sean Kveum, CFII with Corvallis Aero Service, flew the airplane cross country from Wichita, Kansas, and is shown in the picture right after landing in Oregon.

Adding this airplane to the fleet is another step to maintain our mission, teaching OSU students and affiliates to fly in state of the art airplanes.